From birth till death I. S. Turgenev was greatly devoted to Spasskoye-Lutovinovo, and he always longed to return there. There he created most of his works.

At the end of the XVI century Russian Tsar Ivan the Terrible granted the Lutovinovs this land. The estate was founded and built by Ivan Ivanovich Lutovinov - the writer's granduncle. Then it was owned by I. S. Turgenev's mother Varvara Petrovna. When the estate was founded its main house was a huge building with two stone galleries going in semicircles in both directions. Each of the galleries ended in a wooden wing. 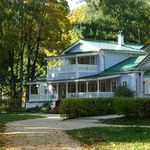 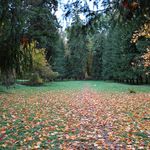 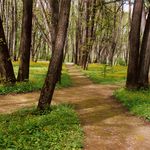 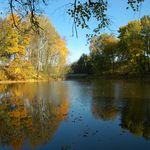 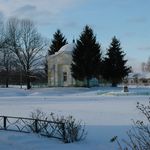 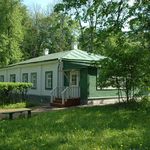 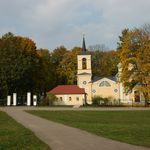 There was a park with an area of 40 hectares (98,84 acres) around the estate. The arrangement of the estate was finished with the building of a stone church in 1809. In 1816 I. S. Turgenev's parents were married in the church. The future writer was in his fifth year when his family settled in Spasskoye.

The estate has not remained in its primordial state. The large estate house was burned down in 1839. Only the left wing survived the fire. After the complete rebuilding it served as the main house of the estate. Not far from it there was built an outhouse for the writer's uncle who was the administrator of the estate. From May, 1852 till December, 1853 there lived I. S. Turgenev, as he was banished to Spasskoye under police supervision.

When in France Turgenev wrote to his friend Y. P. Polonsky, «When you are in Spasskoye, bow to the house, the garden, my young oak, my motherland which probably I will never see again». The mentioned oak was planted by the writer in his childhood. Now the tree is more than 170 years of age.

After I. S. Turgenev's death his heirs didn't want to live in the estate, so they removed all the things from it. The estate was neglected for many years. And in 1906 it was burned down for an unknown reason.

The decision to reconstruct the house was taken in 1968 in connection with the writer's 150th anniversary. The original furniture and items were returned to the house. And on the 25th of September, 1976 the memorial exposition was opened for visitors.

The state memorial and natural museum-estate of I. S. Turgenev «Spasskoye-Lutovinovo» is open for its visitors every day from 10.00 till 17.00. The excursion service works from 10.00 till 16.00 on the basis of an advance application.

For specialists and tourists interested in the local history, geography and culture there can be organized additional walking tours about Spasskoye-Lutovinovo. Every last Saturday of July the traditional Turgenev festival is organized in the estate.