Mzensk appeared in the place of an ancient Vyatich settlement. It was first mentioned in Russian chronicles in 1146. In the middle of the XIV century it passed under the authority of Lithuania.

In 1503 the town formed a part of Russia once and for all. In the XVI - XVII centuries Mzensk became a defensive fortress at the southern state's borders. And since the middle of the XVII century the town has grown into a large commercial and trade centre of the Upper Oka basin.

Modern Mzensk is the third largest town of the region; it is an industrial and agricultural centre. There is the preventive sanatorium "Mzensk" 19 km (11,81 mi) away from the town. It is especially popular as a ski resort in winter.

The town was first mentioned in Russian chronicles in 1177. It bulwarked the princedom against the Polovtsians. At the beginning of the XVII century Livny was one of the centres of the popular uprising against the government of Boris Godunov in 1605 and the government of Vasily Shuysky in 1606-1607. In 1778 it became the chief town of the Oryol vice-royalty.

In the XIX century Livny became one of the commercial and trade centres of Oryol province. At that time native craftsmen began producing the famous "livenka" - a kind of the Russian folk, button accordion. Livny and Livny province were the birthplace of such eminent people as N. N. Polikarpov - an aircraft designer, Sergy Bulgakov - a theologian philosopher, F. V. Rostopchin - a distinguished statesman, N. Y. Danilevsky - a scientist. 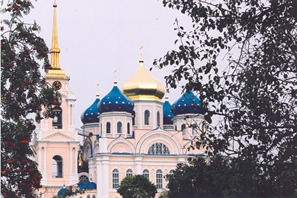 Bolhov is an ancient Russian town. It was first mentioned in Russian chronicles in 1196. In the XIII century it was a fortress to defend the southern state's borders against the Tatars' forays. Gradually the town lost its defence importance and turned into a commercial and trade town. Bolhov was on fire in 1748 and in 1863, but it was rebuilt and went on developing.

Bolhov is famous for its churches and cloisters. There were 28 parish churches, the Optin and the Bogoroditsko-Vsesvyatsky Convents in the town. Nowadays the majestic six-altar Transfiguration Cathedral towers above the central Bolhov square. Its construction started in 1841 and finished 10 years later. It accommodates up to 4500 people. Most of the churches were destroyed. Recently twelve churches have been reconstructed.

In 1778 it was founded as a chief town of a district of Oryol vice-royalty. It was a commercial and trade town located in the fertile and populous district.

In course of a journey A.S. Pushkin visited the town. The case happened to A.S. Pushkin in Maloarchangelsk is assumed to be put into the plot of the play "The Inspector General" by N.V. Gogol.

The town was violently destroyed during the Great Patriotic war. In the post-war time its economy was restored, new enterprises were built up. There are two secondary schools, a technical school, two libraries, a movie theatre and Battle Fame museum.

The first mention of the town belonging to Chernigov princedom was in Russian chronicles in 1155.

Since 1352 it had been the capital of Novosil princedom. In 1442 the town passed to Lithuania, but in1494 it was restored under the power of Russia. In the 16th-17th centuries Novosil was one of the most fortified settlements at the southern state’s borders.

Eight kilometres from Novosil down-stream the Zusha river there is a village Vjazy. The road leading to the village passes by the architectural monument of the 18th century – former the Holy Spirit monastery of Zadushnoe settlement.

During the Great Patriotic War Vjazy settlement was a field of violent action. That battle began driving German fascist invaders from Oryol region. The Battle Fame blotter was erected in that place.

The little village Dmitrievka was founded by Moldavian sovereign Dmitry Kantemir in1711. The village became the chief town of the district of Oryol vice-royalty called Dmitrovsk. In 19th and the beginning of the twentieth century Dmitrovsk was one of the commercial and trade centres of Oryol province.

Nowadays the leading economic industries of the town are the light and food ones.

There are a lot of remarkable architectural monuments of the 17th century in Dmitrovsk. They are towers, gates and walls of the estate of Kantemir. The park is a classic example of the landscape art. The Church of Dmitry Solunsky built by D. Kantemir in 1725 has been preserved since then.