The National Park «Orlovskoye Polesie» has been established for the protection of cultural as well as natural landscapes of Central Russia, thus preserving traditional forms of the land use. It is also dedicated to recreational activity and to ecological education of population.

«Orlovskoye Polesie» is a remarkable corner of Russian nature that fascinates with its beauty in any season of the year.

In 1994 the Russian Federation Government established the National Park «Orlovskoe Polesie». «Orlovskoye Polesie» is situated on the territory of Khotynetsk and Znamensky districts in the north-western part of Oryol region. It is on the junction of two zones with different natural and climatic conditions – the broad-leaved forests and the forest steppe. The total area of the park is 17, 745 hectares. The forest tract embraces 33 000 hectares, the rest of the total park area are occupied with farm lands. There are five areas of forest: Krasnikovskoye, Peshkovskoye, Turgenevskoye, Mihailovskoye, Lgovskoye and some farms and enterprises.

The relief of the park includes flat, sloping and hilly plains consisting of glacial sand, sloping and argillaceous layers. Dunes up to 10 metres in height are also found there. 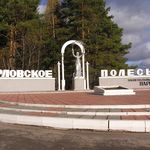 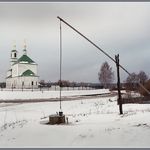 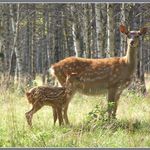 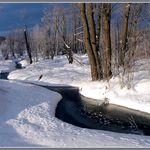 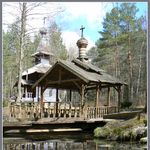 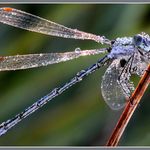 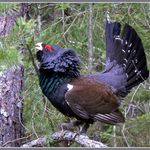 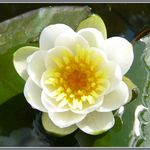 The territory of «Orlovskoye Polesie» is divided into eight functional units in different modes of preservation and utilization.

In the reserved zone a wide variety of natural complexes including unique associations of animals and plants are preserved in natural conditions. Any kind of economical activity is prohibited there. Only strictly controlled attendance is allowed in the especially reserved zone. Such birds as wood grouses or wading bitters live in the zone. There are also genetic reserves of local ecotypes of European firs and pines.

In the recreational zone it is possible to go sightseeing and have a rest. The total length of the trail is equal to 97, 3 km.

The ecological zone is destined for teaching the youth to be responsible for the nature.

In the ecological agriculture zone there are lands of collective farms and allotments of dwellers. The main terms of running agriculture in the area is to grow ecologically pure products without pesticide and chemical fertilizer.

The recovery zone includes forests and plantations of trees and shrubs growing on the detached agricultural lands.

Restricted nature management is applied in the conservation zone. The reverine tracts of the National Park «Orlovskoye Polesie» belong to the Oka River basin.

The main river of the park «Vytebet (the right tributary of the Zhizdra River that flows into the Oka in Kaluga region) runs across almost the whole territory of «Orlovskoye Polesie» in the meridian direction. The total length of all rivers and streams of the park is 356 kilometres. There are many lakes and ponds in the park. The largest ones are lakes Bolshoe (60 hectares), Staroe (24 hectares),Tsentralnoye (7,6 hectares) and Rjasnik (1,2hectares). Springs are also aboundant in the area. «Svjatoy kolodets, «Lgovski», «Rjasnik», «Zhuravlik» are the most popular springs. The flora in Polesie is variegated.

The reliefs and soils have a marked effect on the difference in natural vegetation. The pine, fir and the mixture of coniferous and broad-leaved forests occupy the area. In addition to the linden trees that predominate the plane-shaped, maple, oak and ash trees grow in the park’s broad-leaved forests. Flood plains and waterless valleys, edges of a wood, wastelands as well as marsh and water ecosystems are also found there.

The pine forests, mainly located in Turgenevski, Lgovski and Michailovski areas of forests, occupy half the territory of the park. Mossy-pine woods are the most common. The flora of the park represents more than 900 species, 130 plants are scarce and 31 species cannot be found anywhere else in Oryol region. The animal life of «Orlovskoye Polesie» is also of great interest. Among 203 vertebrates there are 51 species of mammals, 220 species of birds, 5 species of crawlers, 11 species of amphibious and 17 species of fish.

The endemic species of our country Russian desman was entered the «Red Book» in 1920. The species had been reduced to critically small numbers. The hunting of the animal was banned the same year. The desman is an aquatic insect-eating animal closely related to moles. Its head and body measure about 25 centimetres, with a tail of 17 centimetres in length. It is an omnivorous animal, but prefers to eat animals, mollusks, leeches or insects. A desman may consume as much as its weigh in food daily. Not only hunting desmans for their fur and musk has reduced the number of species, but such environmental degeneration as dewatering, growing shallow and sedimentation of reservoirs, extinction of wood and bush vegetation had severe affect on the endangered animals.

Every effort is made to regenerate the population of the Russian desman on the territory of the National Park «Orlovskoye Polesie».

In 1996 20 individuals of the vanishing species were reintroduced to the Vytebet basin.

Nowadays the program of creating a free-living group of European bison is being realized in the park. Three main groups of about 180 bison inhabit in the area. Every year a new breed is born.

Typically taiga species (the cock of the wood, the hazed –grouse, the woodpecker) live in the vicinity of the representatives of the steppe fauna (the steppe polecat, the partridge, the quail).One can meet the elk, the European red deer, the roe deer, the beaver, the wolf, the white hare and the fox.

Ornithofauna numbers 147 nest-building birds, 45 of them are rare and 9 of them found as isolated pairs. The wood-grouse and hazel-grouse remain only in the forests of Khotynets and Znamensky districts of Oryol region.

The large open-air cage is inhabited by 30 species of animals and birds. Endemic to other climatic life zones the Guanako, ostrich, mouflon (wild sheep) have acclimatized in the area and delight children visiting the Zoo.

«Orlovskoye Polesie» is closely connected with the life of the great Russian writer Ivan Sergeevich Turgenev. The characters of his «The notes of a hunter» lived there. That is indeed the place where he derived his creative strength from the Russian nature. The beauties of locality in the bend of the Rosata river surrounded by the vast ancient forests resembling high seas in appearance are described in Turgenev’s short novel «The trip to Polesie». The writer liked to stroll with his hunting rifle and dog along the marshy rivers Vytebet and Shkovka. I.S. Turgenev won the indisputable authority among hunters. His article «Fifty Drawbacks of a Gun Hunter and Fifty Drawbacks of a Gun Dog» has become a useful manual for future hunters.

Polesie is full of legends. In the south-western part of its territory there is a village called «Devjat Dubov» («Nine Oaks». According to legend There grew nine oaks – the shelter of Solovey-Razboynik (Nightingale-Highwayman) who gang robbed and killed wayfarers and even assaulted and destroyed Odrinsky Monastery. Solovey-Razboynik was defeated by Ilia-Murometz. The substation «Devjat Dubov» was renamed to please the monks and now it is «Odrinskaya» station.

Recreation zones are set up at the lakes «Staroye», «Tsentralnoye» and «Ryaznik». Tourists can hire sport equipment on the territory of Lake Tsentralnoe. Excursions on the park, eco-paths, open-air cages and to «The Holy Fount» are organized for tourists.

In the folk museum of Iljinskoye settlement. One can enjoy performances of the folk group. It is possible to have a good time at the equipped springs and go fishing on the lakes where the carp, the crucian carp , the pike , the silver carp and the grass carp are found. There are two comfortable fully equipped Hotel Complexes.